The touch screen control panel is a nice touch (no pun intended). The color TFT Touch panel allows control of the 3D printer for performing different functions including selection of objects to print from a SD memory card. A practical suggestion is to buy a micro-SD card and adapter then you can use a second adaptor on your computer to load files into the micro-SD card and transfer the card to the 3D printer to allow printing without tying up your computer for printing.

The glass-ceramic heated print bed size is roughly 40% larger than a 200X200 print bed. You can print larger objects with this printer than a standard 200X200X300 volume 3D printer. :)

The printing speed determines how quickly an object may be printed. Most 3D printers in this price range print at a maximum accurate speed of 100mm/Sec. This printer can potentially print 3D objects in 2/3rds the time of other printers.

One feature of the 3D Printer is the A.C. powered heat-bed. By using the A.C. power instead of the D.C. power supply the bed heats to operating temperatures much faster (higher power due to higher voltage) and reduces the load on the D.C. power supply but at least 1/3rd. A second feature of the heated bed is the construction is of glass-ceramic, which is very smooth and flat. Being flat means you don't need to use auto-leveling as is normally required with aluminum heated and non-heated beds due to non-level effects caused by manufacturing. Once you have leveled the bed manually there is no need to perform bed leveling every print.

The transverse speed determines how 'fast' the print head can be moved from on print position to the next for multiple item printing. This printer is capable of transversing the print head assembly at a blistering 250mm/Sec.

What happens when there is a power failure or power 'glitch' as in a power brown-out?? With most 3D printers, unless you have an UPS to maintain power during such an event (extra cost) you have to start over on the printing of your 3D object. Not so with this 3D printer! It has the ability to recover from a power failure or brown-out and resume where it left off on the print! This is not a function of most 3D printers out there.

How many times have you heard the expression that someone was "air printing"?? What someone is saying is the 3D printer ran out of filament (due to running out of filament breaking) but the printer continued to perform the printing job. This will not happen with the Artillery 3D Printer as it has a filament runout detection sensor standard on the printer! If the sensor detect the filament has reached the end it will halt the printer until the problem is resolved. Once the filament problem is resolved the printer starts printing where it left off so you don't have to start over a long print job! On most other 3D printers in this price range this is not a standard feature!

Unlike a lot of DIY 3D printers on the market this printer is already assembled and only requires a couple of screws installed to hold the main rail assembly to the base. With a couple of electrical plug connections you can be up and printing in as little as 20 minutes from the time you receive the printer and open the box. Instructions for setup, calibration and proper use if the 3D printer are included.

This 3D printer has an accuracy in the X-Axis and Y-Axis down to 50 microns. The accuracy on the Z-Axis is 100 microns.

Unlike a lot of DIY 3D printers on the market this printer comes standard with a Volcano style hot-end assembly. The Volcano style hot-end is known for it's ability to deliver high flow-rates of filament to the printed object. The higher flow-rates allow faster printing since the hot-end can deliver higher flows of liquid filament to the printing operation.

Unlike a lot of DIY 3D printers on the market this printer is built using all metal parts. The use of all metal parts insures the printer frame is very stable and rigid which translates to better accuracy of printing 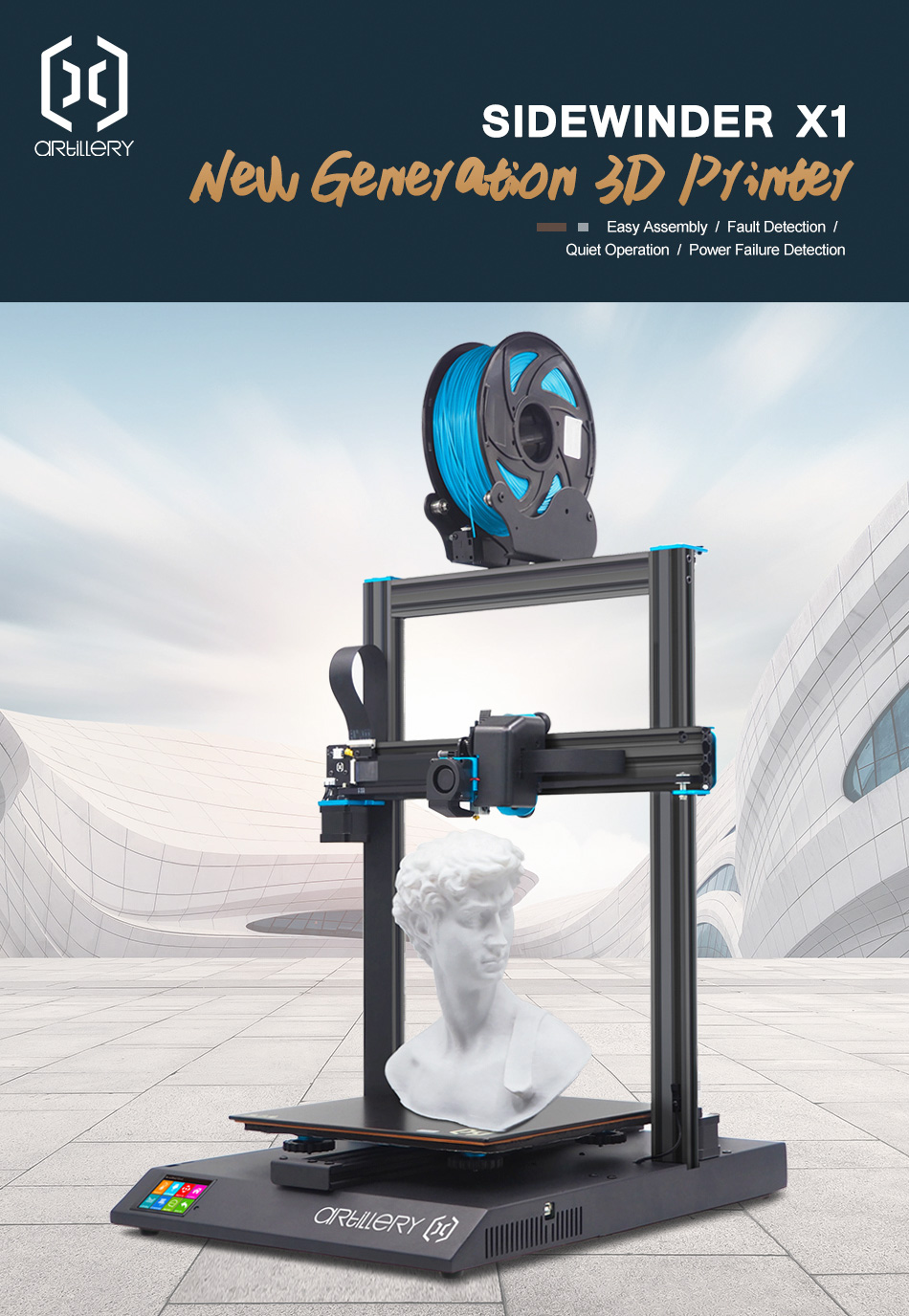 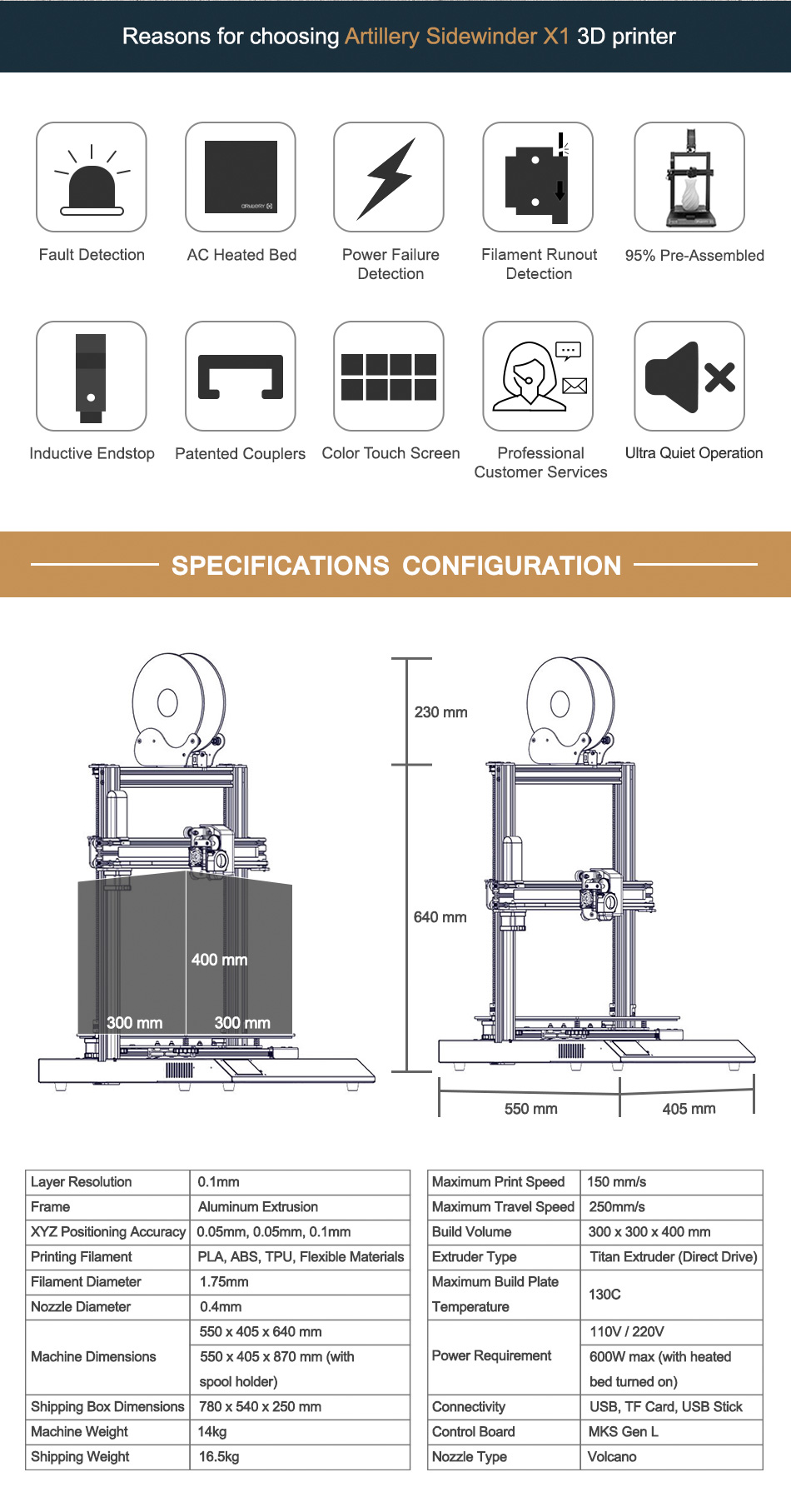 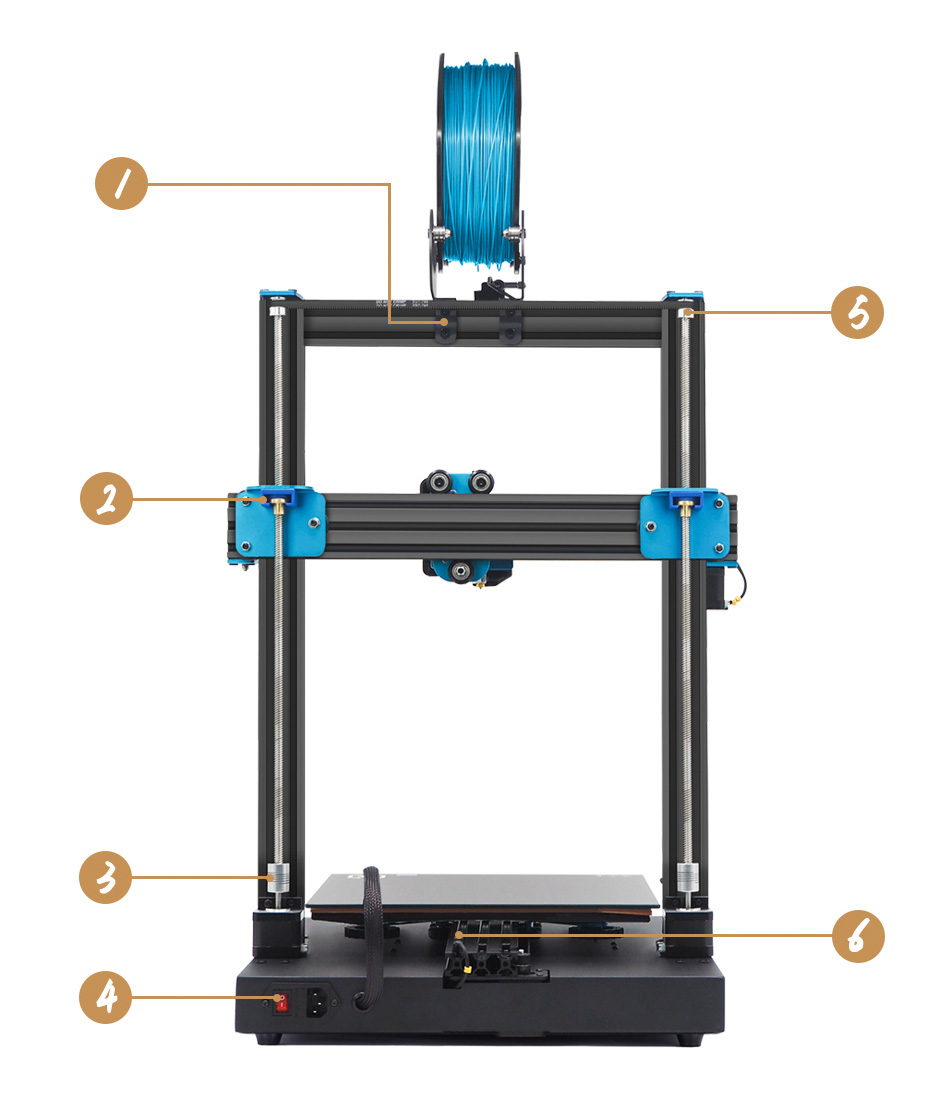 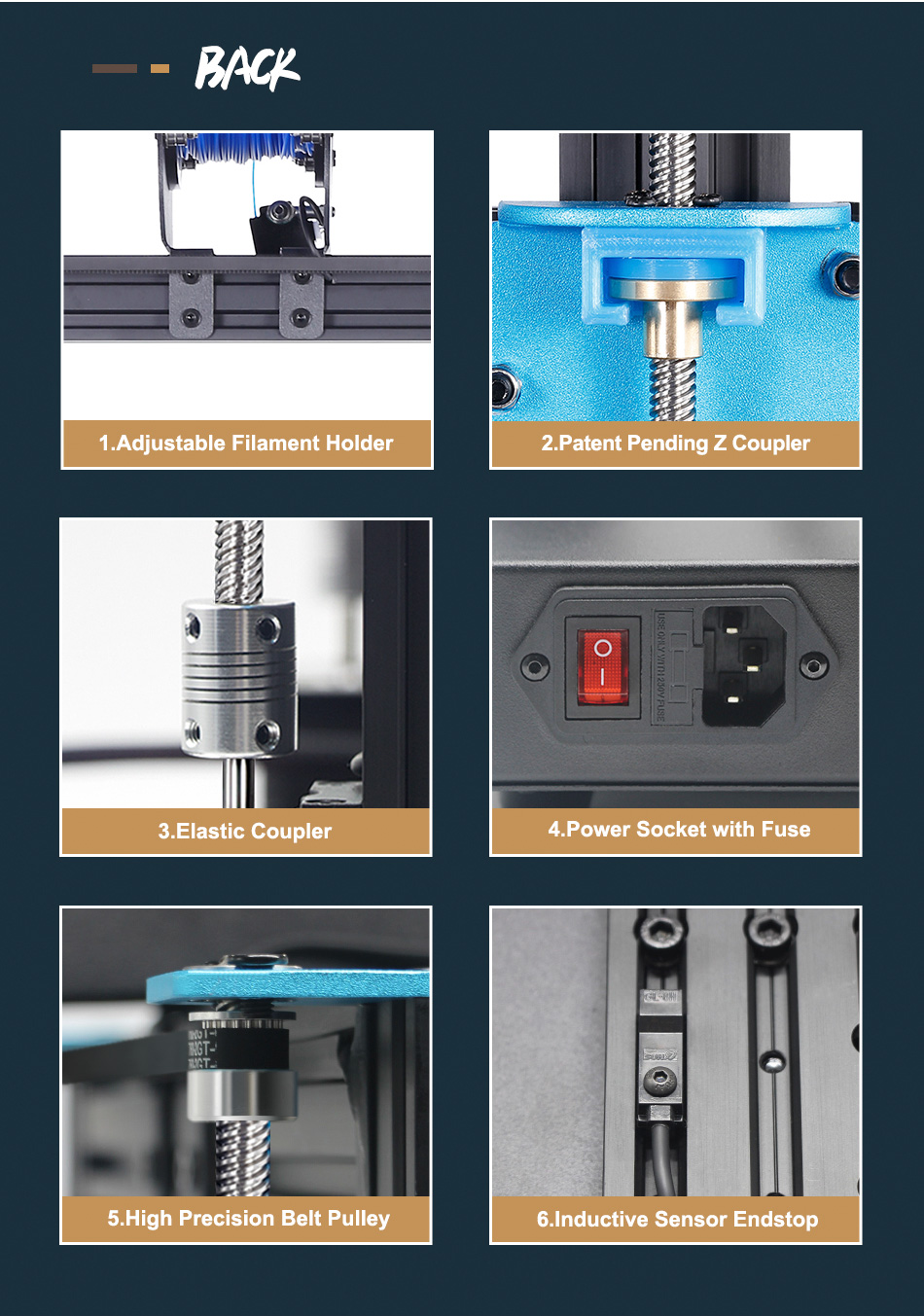 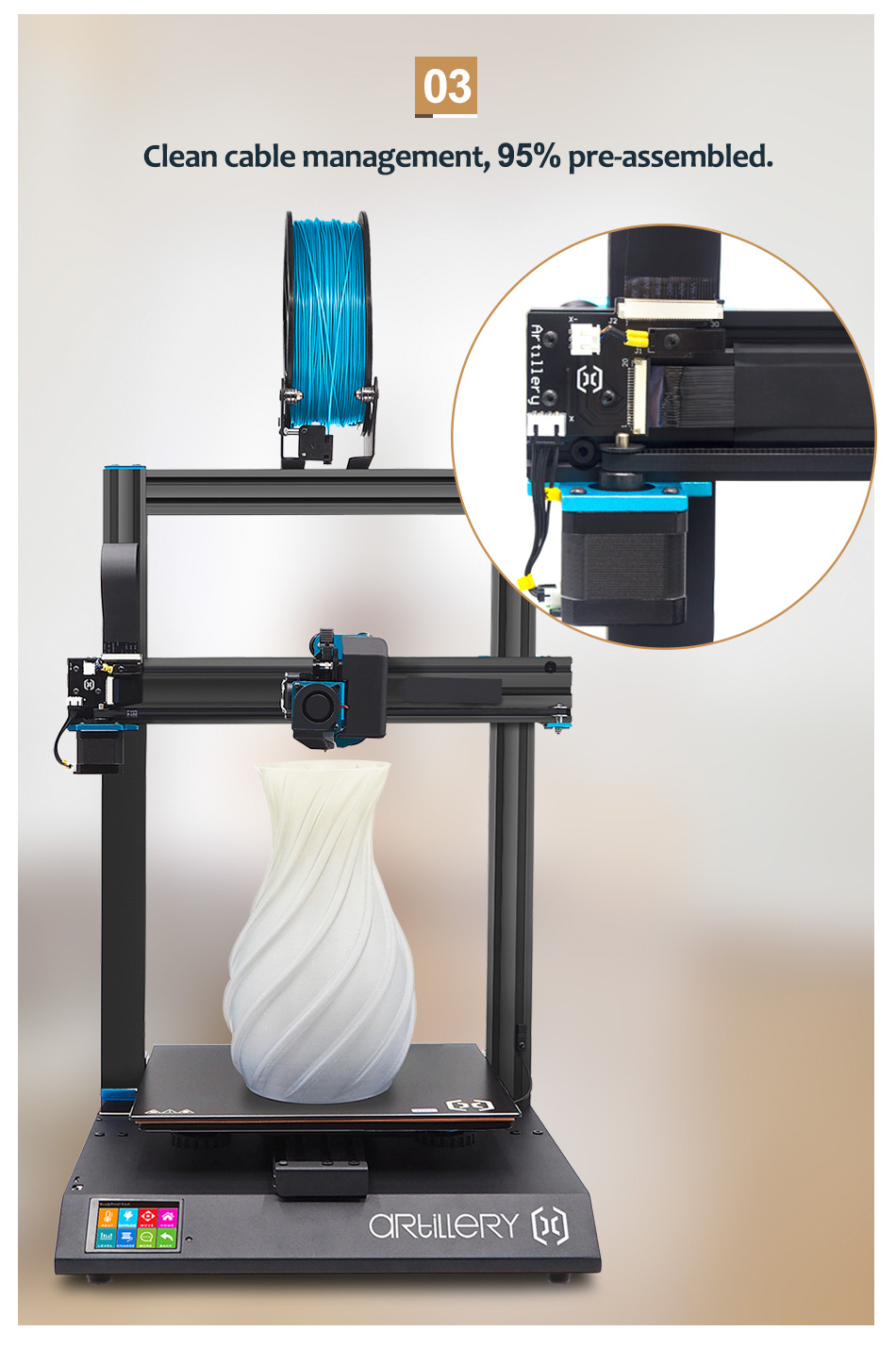 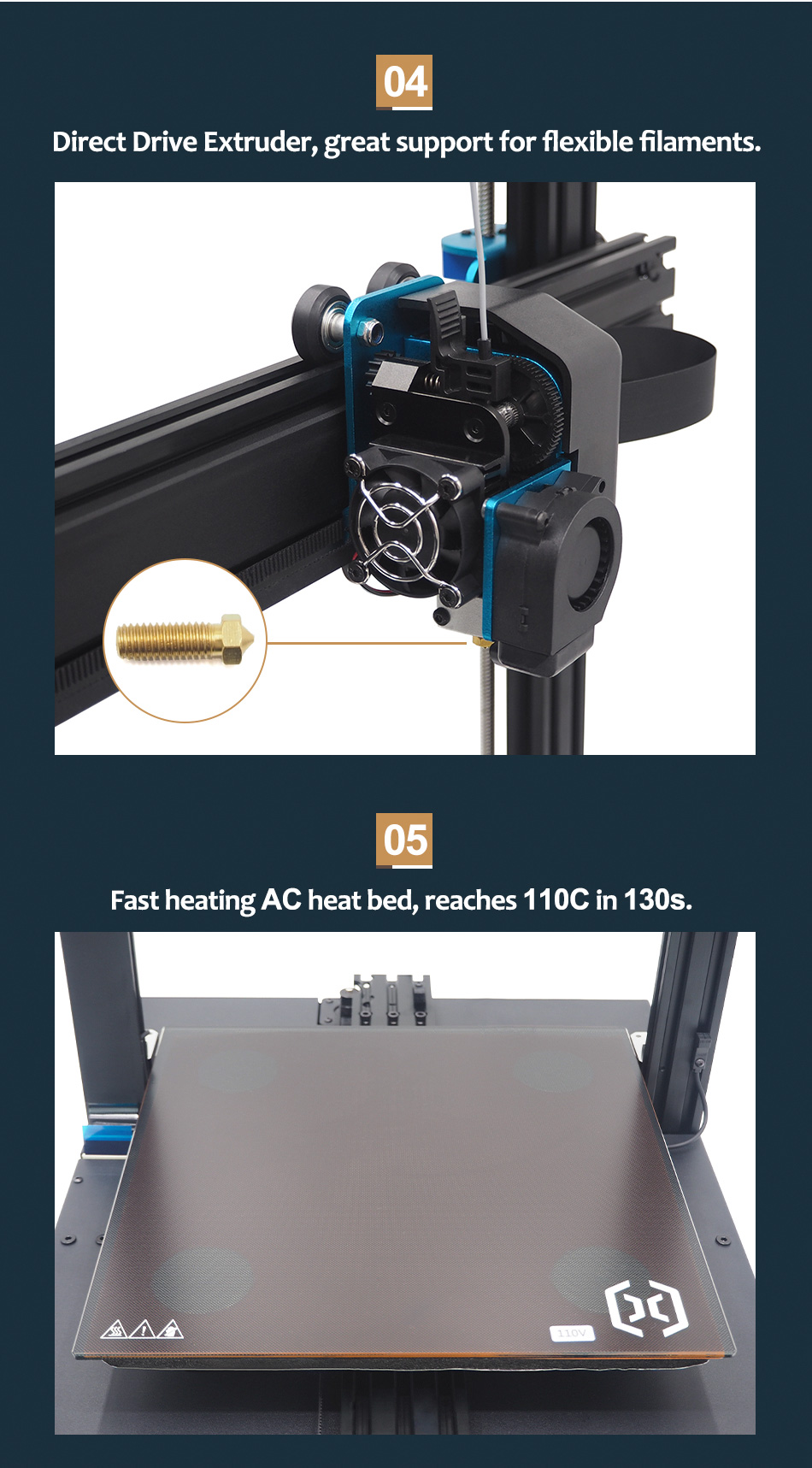 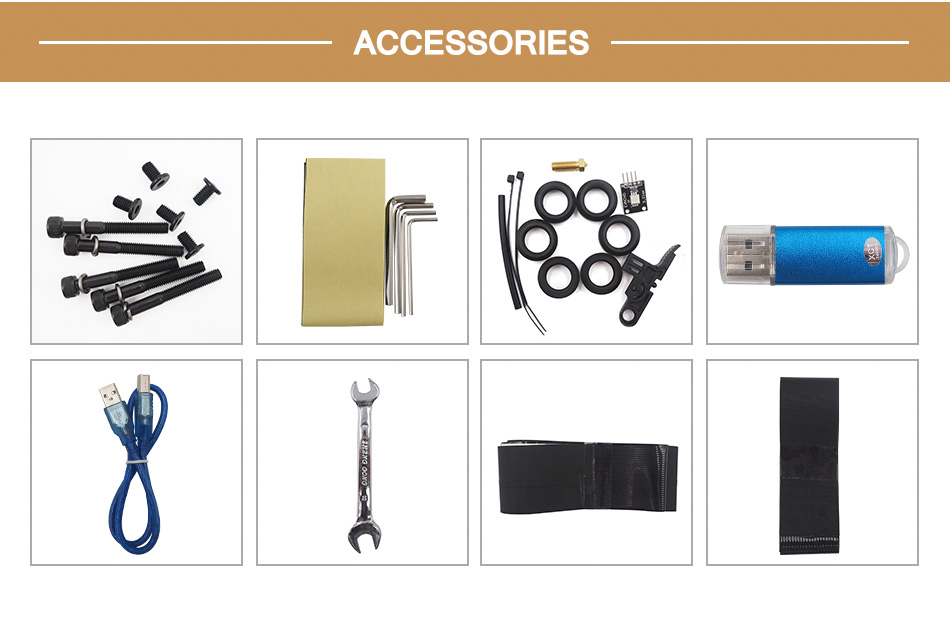